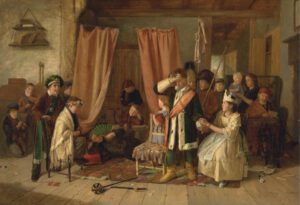 It has often been observed that Shakespeare’s Midsummer Night’s Dream is a metaliterary and metadramatic play. It presents not only the rough course of true love but also the glories and failures of the poetic imagination and of theatrical illusion, most obviously so in connection with the play within the play performed by Bottom and his fellows. What has less often been pointed out is the argument about genre(s) that is conducted in A Midsummer Night’s Dream. Peter Quince refers to the play within the play as a “most lamentable comedy” (1.2.11); the list of entertainments offered to Theseus describes it as “tragical mirth” (5.1.57). More than 300 years later, Ford Madox Ford similarly plays with the term tragedy in The Good Soldier. The narrator of the novel initially rejects the label of tragedy for the events he is presenting, preferring to describe them as “the saddest story,” but by the end of his narrative he has changed his mind, calling the story a tragedy indeed. Our symposium will focus on works that, like A Midsummer Night’s Dream and The Good Soldier, reflect on the genre(s) to which they belong; this self-reflection may be either explicit or implicit. Questions to be dealt with include: What are the techniques used to make self-reflexive statements about genre? Are parodies by definition examples of metagenre? Do the reflection on genre and the performance of genre in one and the same work support or undermine each other? Is metagenre an indication of genre change or genre crisis? Are some genres more likely to become self-reflexive than others (e.g. sonnets about sonnets)? How significant is the concept of genre after the romantic emphasis on originality and uniqueness?

You can also download the programme as PDF here.

14:15          David Fishelov (The Hebrew University of Jerusalem), “Parodies of Six-Word Stories: A Humorous Version of Metagenre”

Metagenre on the Stage

18:00          Dorothea Flothow (University of Salzburg), “Victorian Theatrical Burlesque as a Comment on Theatrical Genres and Conventions”

The Epic from Homer to the Twenty-First Century

16:00          Lena Linne (Ruhr University Bochum), “‘Sing, Muse, he said, and I have sung’: Metageneric Reflection in Contemporary Rewritings of the Homeric Epics”

14:30         Tom Zille (University of Cambridge), “This Tragic Acting: Metageneric Reflection in the Novels of Ivy Compton-Burnett”

18:30         Katrin Berndt (MLU Halle-Wittenberg), “‘Speak, Mnemosyne’: The Poetics and Performance of Genre in Petinah Gappah’s Memoir-Novel The Book of Memory”