Home » Discover Literary Anniversaries » December 2022 – Not That Interchangeable: Middleton’s and Rowley’s The Changeling (1622)

Extract from The Changeling, Act 4, Scene 2

In The Literary Encyclopedia, Anja Mueller-Wood speaks of “principles of change and replacement” as being “central” to The Changeling, a play first performed in 1622, and collaboratively written by Thomas Middleton and William Rowley. There is, of course, Antonio, the play’s changeling himself, in the sub-plot, and Beatrice’s maid in the main plot, who “substitutes her during her wedding-night to keep her husband in the dark about the loss of her virginity.” Besides that, there are more changelings in the sense of “fickle or inconstant” characters who “change their attitude or allegiance” (“changeling, n.” OED II.5.) in the play, e.g. “Beatrice-Joanna (whose double-barrelled name itself spells duplicity)” and Deflores, “whose apparent servility is a mere masque, too” (Mueller-Wood). 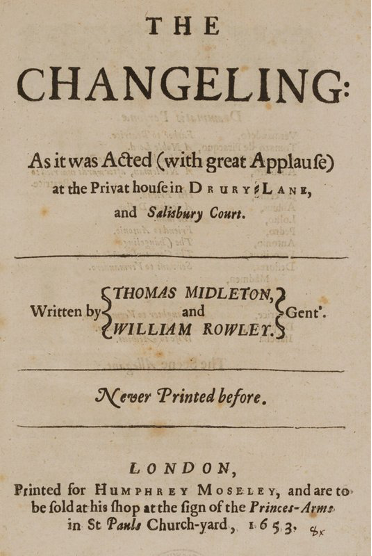 While it is known by now that “[c]ollaboration was so common in the [early modern] period that Shakespeare, along with a few other dramatists such as Ben Jonson, was probably unusual in the extent to which he wrote as a sole author” (Jowett 17), many literary analyses still focus on identifying the respective contributions by individual authors through stylometric methods, which often (implicitly) depreciate the collaborative endeavour of such works.1) In an alternative approach, The Changeling offers a new perspective on the question of co-authorship on the basis of the topic of interchangeability that is so prominent in the play. Middleton and Rowley each collaborated numerous times with various other playwrights—Thomas Dekker, John Webster, Thomas Heywood, John Fletcher to name some examples—over the course of their careers; specifically, Rowley was “primarily a collaborative writer” (Hutchings 3). This tendency towards co-authorship rather than single-authored plays begs the question if an early modern playwright’s co-authors were themselves interchangeable. Perhaps some decisions as regards the choice of co-author were made on economic grounds, and surely some authors simply enjoyed each others’ company more than others’.2) In the case of The Changeling, however, research has shown that both Middleton and Rowley brought distinct specializations to the table that were quite necessary for the completion of the play. The “accepted division of their respective contributions to The Changeling” (Hutchings 3) are informative of both playwrights’ specific strengths: Rowley, who “had an aptitude for writing and performing clown scenes” wrote “the three subplot scenes, consisting of comic material set in a hospital or madhouse” (3). To assume that a collaboration is “inferior” or a “deviatio[n]” from “the ‘norm’ of sole authorship traditionally more highly valued by critics” (4) thus means a failure to consider that a plurality of authors equals a plurality of strengths and specializations.3) Rowley accordingly was not at all interchangeable with Middleton, even if Hutchings (perhaps inadvertently4)) calls Middleton the “more accomplished dramatist […] because Rowley was primarily a collaborative writer” (3; my emphasis).

The Changeling is only one of numerous collaboratively written plays (and works) in early modern England. If you want to find out more about such collaborations and other forms of co-authorship and co-creativity in the early modern period, feel free to either visit the website of  Tuebingen’s Collaborative Research Centre on Different Aesthestics (click here for direct link to the website of project C05 The Aesthetics of Early Modern English Literature) or roam around on the website of the project’s digital exhibition on the topic of Co-Creativity in English Literature Through the Ages: From Shakespeare to Fanfiction. The principal investigators of both the project and the exhibition are two of the Connotation editors, Angelika Zirker and Matthias Bauer.