Text Read in the Video: “Monday or Tuesday”

Lazy and indifferent, shaking space easily from his wings, knowing his way, the heron passes over the church beneath the sky. White and distant, absorbed in itself, endlessly the sky covers and uncovers, moves and remains. A lake? Blot the shores of it out! A mountain? Oh, perfect–the sun gold on its slopes. Down that falls. Ferns then, or white feathers, for ever and ever–

Desiring truth, awaiting it, laboriously distilling a few words, for ever desiring–(a cry starts to the left, another to the right. Wheels strike divergently. Omnibuses conglomerate in conflict)–for ever desiring–(the clock asseverates with twelve distinct strokes that it is mid-day; light sheds gold scales; children swarm)–for ever desiring truth. Red is the dome; coins hang on the trees; smoke trails from the chimneys; bark, shout, cry “Iron for sale”–and truth?

Radiating to a point men’s feet and women’s feet, black or gold-encrusted–(This foggy weather–Sugar? No, thank you–The commonwealth of the future)–the firelight darting and making the room red, save for the black figures and their bright eyes, while outside a van discharges, Miss Thingummy drinks tea at her desk, and plate-glass preserves fur coats–

Now to recollect by the fireside on the white square of marble. From ivory depths words rising shed their blackness, blossom and penetrate. Fallen the book; in the flame, in the smoke, in the momentary sparks–or now voyaging, the marble square pendant, minarets beneath and the Indian seas, while space rushes blue and stars glint–truth? or now, content with closeness?

Lazy and indifferent the heron returns; the sky veils her stars; then bares them.

On the 7th or 8th March 1921, Virginia Woolf published her short story collection Monday or Tuesday. The included short stories were “A Haunted House”, “A Society”, “Monday or Tuesday”, “An Unwritten Novel”, “The String Quartet”, “Blue and Green”, “Kew Gardens” and “The Mark on the Wall”. Many of these stories are rather driven by the meanderings of one or several consciousnesses than a plot. By laying out to us the wanderings of consciousness and snippets from conversations, Woolf makes the reader the judge of them and tests our trust in the speaking voice. The stories do not focus on merely representing what we see, but how we view these things as they travel through our complex minds in a stream of consciousness (Benzel and Hoberman 158). 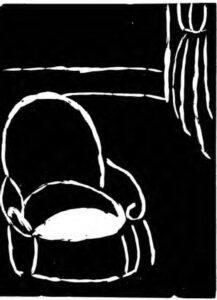 “A Haunted House” describes how a long dead couple still haunts a house that they have lived in and, thus, the narration overcomes the limitations of time. This story shows different forms of unification and dissolution: on the one hand the couple is united through death, on the other hand, the narrator and the couple are separated by death (Benzel and Hoberman 23). The house “merges with human factors, both dead and alive” (Benzel and Hoberman 23) and increasingly merges with nature, which becomes a way of overcoming death. A house that later dissolves in nature can also be found in the “Time Passes”, part of Woolf’s later novel To The Lighthouse.

In a reprint of Woolf’s short story collection Monday or Tuesday, published in 1941 after her death, Woolf desired to omit “A Society” from it. This short story appears to be more conventional than others, also due to the fact that it is more plot-driven, and, possibly, Woolf believed that it does not demonstrate well enough the “innovations she was making in narrative technique” (Dick 51). In the story, she jots down one of her first explorations of feminist viewpoints which are elaborated upon further in her essays A Room of One’s Own and Three Guineas. In “A Society”, Woolf describes a group of women who form their own society and question the value of literature written by men. The described scenarios are viewed through the eyes of Cassandra whose judgements are less radical than those of many other women in the room. This technique can be considered an attempt by Woolf to let her readers make their own judgements about the conclusions that this presented society draws (Dick 55). 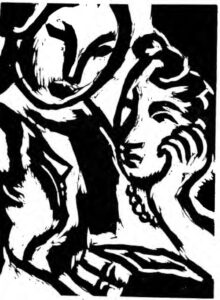 A woodcut by Vanessa Bell for the short story “A Society”

In “Monday or Tuesday” the anonymous narrator simply watches a heron, nature and the city life as an “experiencing mind” (Benzel and Hoberman 21), even though “no narrative or speaking voice is clearly identified” (Benzel and Hoberman 165). The heron melds into the clouds, which constantly transform into a lake, a mountain, ferns, feathers… Its indifference to human life is foregrounded in the story. The heron is contrasted with a panorama of the city life with its roaring omnibuses, lively crowds and a rather calm tearoom. The gap between the natural and the human world is overcome by travelling via the imagination, as the speaker takes the reader on a journey of shifting images. The speaker rounds up the story by ending on the heron’s return. This shows how the narrator’s focus is constantly disrupted by traffic noises and permanently shifting from one thing to another, even though he/she just started off observing a heron; a technique that strongly resembles “The Mark on the Wall”. 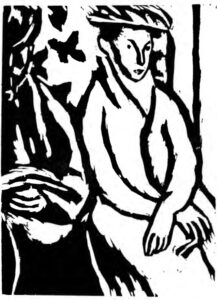 A woodcut by Vanessa Bell for “An Unwritten novel” short story

In “An Unwritten Novel” the first-person speaker travels in a carriage with another woman and starts to imagine her story, in which he/she calls her “Minnie Marsh”. The speaker’s mind imagines everything that woman could think and feel in that moment and often interacts with her mind. The speaker believes that a sigh, for instance, confirms one of his/her speculations about Minnie: “As if she heard me, she looked up, shifted slightly in her seat and sighed” (Woolf 46). Woolf’s wit kicks in, when she, amongst wild imaginings of Minnie’s family life, says “But I’m off the track” (Woolf 54), only to keep decorating Minnie’s story with additional details. Sometimes the speaker expresses his/her awareness or doubts of his/her own imagined story: “Are you down too, you in the corner, what’s your name–woman–Minnie Marsh; some such name as that?” (Woolf 59). When they arrive at the train station, the speaker realizes that the imagined story does not correspond to the truth, as “Minnie Marsh” is met by her son at the train station, even though the speaker imagined her to be childless, and he/she is forced to question the importance of the invented story and its figures: “Well, my world’s done for! What do I stand on? What do I know? That’s not Minnie. There never was Moggridge. Who am I? Life’s bare as bone.” (Woolf 69)

A woodcut by Vanessa Bell for “The String Quartett” short story

“The String Quartet” displays similar shifts of consciousness like in “Monday or Tuesday” and “The Mark on the Wall”, as the speaker sits in a concert hall and absorbs the conversations around him/her. The reader is transported to different realms of time, as one is presented with images from past centuries, and space, back and forth from stage to audience, through music and conversations at the concert. Similar to “Monday or Tuesday”, the consciousness just experiences; however this particular short story tries to capture music and the emotions evoked by music combined with the communal aspect of people’s comments becoming part of the symphony.

“Blue and Green” are two sketches in which the writing style can be described as “Verbal painting” (Benzel and Hoberman 157), as Woolf attempts to describe with words what one would paint with a brush. The two colours organise around themselves the speaker’s perceptions and wild associations. The scene is set by glass pendants hanging from a lamp. During the day, they reflect a green colour, and as the sun sets in the evening, they shine in a blue colour with the lamp turned on. The colours blue and green also take the reader travelling to the ocean with its “ruffled surface” (Woolf 81). Here Woolf makes use of “metaphors of visual art (color, line, spatial relations), to represent the mind’s complexity and obstinacy” (Benzel and Hoberman 159). The merging of writing and painting was inspired by her personal and professional relations with painters like her sister Vanessa Bell, who also created the illustrations in the Hogarth Press edition of Monday or Tuesday (Benzel and Hoberman xvi). The reader can identify “a consciousness through the use of lyrical patterns that deconstruct and then transform familiar objects like the Impressionist and Post-Impressionist painters” (Benzel and Hoberman 165). In both “Monday and Tuesday” and “Blue & Green” the reader has “to seek out the story’s meaning through defamiliarized objects, ambiguous perspectives, and imaginative reflections” (Benzel and Hoberman 168).

In “Kew Gardens” the reader is tied to the restricted space of a flowerbed, meaning, that one only absorbs the sights and conversations that happen inside and around this flowerbed. Human conversations of four passing couples and descriptions of nature, like the colour of the flowers and the everyday goings of a snail, constantly alternate. Leonard Woolf described “Kew Gardens” as a “Microcosm of Woolf’s then unwritten novels” (Benzel and Hoberman 42). Woolf’s description of Kew captures its beauty in an impressionistic style, similar to the verbal painting in “Blue and Green”. Even though this story has an unconventional narrational style and focus of perspective, many read into it a linear progression with a climax in the ending (Benzel and Hoberman 45).

“The Mark on the Wall” shows how small things can evoke memories of many other things and metatextual contemplations. As the title implies, the speaker discovers a little mark on the white wall of the room which becomes the spatial centre for wanderings of the mind through life and musings on fantasizing and knowledge. Even though the mark is the central topic of the story, it is ultimately irrelevant what the mark actually is. The revelation in the end is rather anticlimactic, and as soon as the nature of the mark is revealed, he/she realizes that the wanderings of the mind form the essence of the story rather than the actual mark which could have been revealed within one sentence. Thus, one rather focusses on all the possibilities of what the mark on the wall could be rather than the knowledge of what it actually is.

Vanessa Bell’s woodcuts were taken from the following website: https://www.brainpickings.org/2013/01/16/monday-or-tuesday-virginia-woolf-vanessa-bell-woodcuts/.