Home » Discover Literary Anniversaries » February 2021: Winter with the Water Poet, Or, the 400th Anniversary of John Taylor’s “The Colde Tearme” (1621)

The 400th anniversary of the publication of John Taylor’s The Colde Tearme, Or, The Frozen Age, Or, The Metamorphosis of the Riuer of Thames is of no great significance – one might be tempted to say of no significance; even in 1621, when this humble but charming broadside was hot off the press, its appearance was inconsequential. Yet, published it was, and some Londoners bought it, read it, perhaps even enjoyed it, possibly put it up on a wall in their home. It recorded an event, after all, that they, too, had very recently shared in: the freezing over of the river Thames. After the thaw, Taylor’s broadside remained, along with slush and mud and a hope for spring. Then, the ‘small months’ of this year, a time of “puddles, pooles, blacke dirt & mire” (Colde Tearme), and of hoping for better things, may be just the time to enjoy this very small anniversary.

Born in Gloucester, but resident in London by the early 1590s, John Taylor is primarily remembered today as a versifying waterman, who tried his hand at travel writing, crowd funding, and the fine art of turning public squabbles into money-making ventures. Amongst his innumerable adventures were a trip in a paper boat – kept afloat by balloons made from animal bladders –, a stint as a ‘bottleman’, which meant collecting bottles of wine for the Lieutenant of the Tower of London, and – in his old age – running an alehouse in Westminster, successively called the Crown, then – following the royal decapitation – the Mourning Crown, and then – following Parliamentarian complaints – the Poet’s Head. In its latest incarnation, the alehouse presented an image of the waterman-turned-publican himself on its sign (cf. Capp).

Taylor’s famous travels were preceded by veritable GoFundMe campaigns avant la lettre: His foot journey to Scotland – immortalized for his subscribers and followers as The Pennyles Pilgrimage Or The Money-lesse Perambulation (1618)1) –, for instance, was financed by 1650 sponsors; his 1649 trip to Land’s End, made precarious by civil war conditions, had the backing of no fewer than 3000 donors. In the summer of 1619, Taylor navigated the Thames in a boat he had himself constructed out of brown paper and inflated animal bladders; in 1617, he visited Hamburg and took the opportunity to compile a cheerfully anti-teutonic report. Taylor’s wanderlust not only prompted him to undertake more far flung and serious travels – like his 1620 trip to Prague in support of Frederick, the Elector Palatine, and his wife, Elizabeth Stuart –, he also became one of the earliest writers of travel guides. His Carrier’s Cosmographie (1637) listed information (including departure times) for wagons and passenger boats leaving London for various destinations (cf. Capp).

Although he was not without genuine convictions (he rejected monopolies, for example, but believed firmly in king and state church), Taylor excelled at publicizing and monetizing his various disagreements with other self-promoters, turning them into pamphlet wars, i.e., the twitter wars of the age. A negative remark about famous traveler Thomas Coryate, for instance, resulted in an extensive pamphlet war, and a 1614 argument between Taylor and William Fennor, a writer and entertainer, culminated in a scheduled public contest between Taylor and Fennor at the Hope Theatre, where they were to compete against one another by making impressions of contemporary celebrities. When Fennor was a no-show, the stood-up waterman published Taylors Revenge. Taylor could also war with himself: in 1639 and 1640, inspired by his friend Thomas Heywood, he published two misogynistic tracts and shortly thereafter anonymously refuted himself in The Womens Sharpe Revenge (1640). When, in the turbulent 1640s, Taylor engaged in yet another pamphlet war, his adversary, the parliamentarian preacher Henry Walker, felt offended enough to hit Taylor with the ‘ur-shitstorm’ – he published a woodcut depicting the devil defecating in Taylor’s mouth (cf. Capp).

Woodcut showing activities on the frozen Thames from the title page of the anonymously published (but possibly written by Thomas Dekker) “The Great Frost: Cold Doings in London, Except It Be at the Lotterie” (London, 1608). The image depicts the first officially documented Frost Fair on the Thames – an event, incidentally, also commemorated in Virginia Woolf’s “Orlando” (1928).

Taylor’s broadside commemorates the freezing of the Thames in January 1621. In the water poet’s lyrical description, it is the frosty east wind, “Boreas (all with Isickles bedight)”, who turns “Thames streames, to hard congealed flakes, / And pearled water drops to Christall cakes.” From the 14th to the 19th century, the Thames froze over at irregular intervals, which caused problems for Londoners (watermen, for instance, could not ply their trade2)) but also brought some surprising pleasures. Various forms of entertainment and gastronomy could be organized on the ice. The first documented Frost Fair on the river took place in 1608, when the river was frozen for six solid weeks. Other notable fairs on the ice took place in 1683/84 and 1715/16. The last and final one was held in 1814 – at no later point was the ice thick enough to support the hustle and bustle of a fair. In the past, the Thames could freeze over because, on the one hand, it was colder during the period known as the ‘little ice age’ (14th to 19th century) but there were other factors involved: The river was shallower and its flow slower; Old London Bridge, with its nineteen arches, obstructed the flow still more, which meant that ice could more easily form (cf. Selli).

Taylor’s description of the 1621 freeze is ambivalent. On the one hand, the prolonged cold brings misery in the form of exposure and starvation to those without adequate income and shelter. Charity herself is left out in the cold and made to suffer the abuse of passers-by. One particularly uncaring soul suggests she be deported to the colonies or locked up and beaten:

There was a Vs’rer, with his Purse fast shut,
Did rayle at her and call’d her Idle slut:
And said she to Virginia should be Shipt,
Or to Bridewell be sent, and soundly whipt.

Finally, Charity is taken in by the masters of a hospital where “at the last (to many a mizers Griefe) / Shee in an Hospitall did finde Reliefe” (Colde Tearme). The brighter side of the frosty clime is the range of fun activities which can take place on the frozen river: a variety of games have been set up and the range of foods available from improvised stalls is impressive. Still, some people prefer just to go about their business as usual, in unusual conditions. Taylor sums up the scene:

There might be seene spic’d Cakes, and roasted Pigs,
Beere, Ale, Tobacco, Apples, Nuts, and Figs,
Fires made of Char-coles, Faggots, and Sea-coles,
Playing and couz’ning at the Pidg’on-holes:
Some, for two Pots at Tables, Cards, or Dice:
Some slipping in betwixt two Cakes of Ice:
Some going on their businesse and affaires,
From the Bank-side to Pauls, or to Trig-staires. 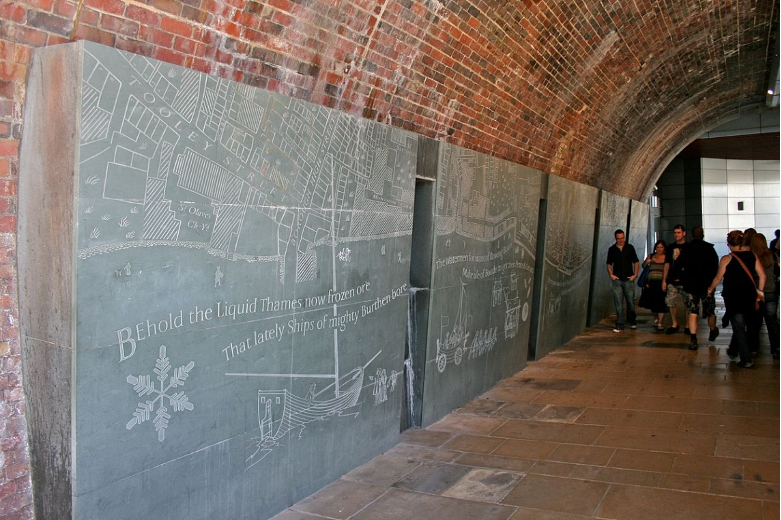 In the wide space between the southern shore, the location of Southwark’s Bankside, and the northern bank, home to St. Paul’s and the Trig Lane Stairs (now to be found under the northern end of Millenium Bridge), Londoners commingle – drinking, eating, playing, slipping on the ice, or warming their fingers against the flames of a coal fire. When the ice had melted in February, Taylor could once again ferry customers of all sorts up and down the river – crying “Eastward Ho!” or “Westward Ho!”, depending on his direction of travel –, and amusing his passengers with quirky observations and speculations on the late great frost.

For more information and some incredible pictures, have a look here:

All the fun of the Frost Fair: why did the Thames freeze? | Museum of London

Londons Wonder: Being a Description of God’s Mercy and Goodness, in the Breaking of this Late Mighty Frost Which Began About the Beginning of December, 1683. and Continued Till the 4th of February Following […]. London, 1685. EEBO. ProQuest. Web. 29 Jan. 2021.