On the first page of Jeanette Winterson’s Written on the Body, which was first published thirty years ago this month, the nameless narrator declares: ‘Love demands expression’ (1993, 9). The proceeding narrative (Winterson does not like to call her books ‘novels’) then seeks to deconstruct the clichés and stereotypes of love, to understand and remake it, and to find a ‘precise expression’ of it (1993, 10). Published in September 1992, Written on the Body is Winterson’s fifth book; and, due to the immense success of her debut, Oranges Are Not the Only Fruit (1985), Winterson’s readership, as well as the press, had high hopes for its publication. As Merja Makinen notes, however, the critical reception of Written on the Body left something to be desired, with most reviews ‘ambivalent’ at best and harsh at worst (2005, 110-111). Such response was partly due to the text’s apparent regurgitation of romantic platitudes, for all its apparent attempts to dismantle them, and a sense that Winterson’s expansive creativity was not on full display. Yet, returning to the book now, thirty years later, its playfulness and prescience are undeniable. 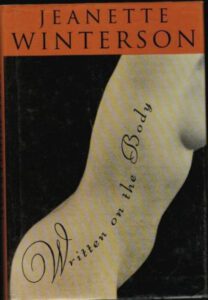 Cover of the 1992 first edition of Written on the Body.

Winterson has never been shy of self-promotion. In a newspaper interview in 1994, she was asked for her ‘Book of the Year’ and, in typically contrarian style, she chose her then most recent book, Written on the Body (Onega 2006, 3). More recently, her burning of numerous new editions of her oeuvre in defiance of the covers – which she claimed turned her ‘into wimmins fiction of the worst kind’ – has been interpreted by some as a publicity stunt (see Mohamed 2021; and Griffiths 2021). Yet both incidents reveal her rebellious streak and nonconformity. And, despite the initially lacklustre response by critics, Written on the Body is another such example of Winterson’s impulse to push boundaries and even, on occasion, to disassemble them.

As well as remaining nameless throughout the narrative, the narrator’s gender is withheld. Winterson keeps readers guessing, so that they remain unsure as to whether this ‘Lothario’ identifies as a man or as a woman – or as both or neither (1993, 20). Critics and reviewers have attempted to pin down the narrator to one gender or sex; yet, as Gregory J. Rubinsond writes, ‘[a]ny attempt to determine the narrator’s sex is necessarily dependent on essentialized or stereotypical readings of gender, or both’ (2001, 220). In this sense, Winterson throws the reader’s own possible presumptions back in their face. The uncertainty of the narrator’s gender raises political questions particularly pertinent to the twenty-first century. Last year, Winterson referred to the narrator of the text as ‘non-binary’ (Mohamed 2021, n.p.). The Oxford English Dictionary notably gives 1995 as the first entry for the use of non-binary to designate ‘a person who does not acknowledge or fit the conventional notions of male and female gender, and instead identifies as being of another or no gender, or a combination of genders’ (see OED). While there have, of course, always been non-binary, gender-fluid, and trans people in fiction (and in history) – with Virginia Woolf’s Orlando (1928) acting as a particular influence on Winterson – Written on the Body predates the widespread use of such language. In this sense, Winterson’s book and its playing with (assumptions of) gender was radical for its time and remains relevant to this day.

The text is also concerned almost obsessively with the body. Just over halfway through, the novel announces a new structure, with several sections named after parts of the body, like ‘The Cells, Tissues, Systems and Cavities of the Body’, ‘The Skin’, ‘Special Senses’. In these subsections, the narrator strips down the body – specifically their ex-lover, Louise’s body – part by part. This acts as a kind of materialisation of literary deconstruction, as the narrator dismantles the parts of Louise to discover the (unstable) meaning of their love and to give it new expression. In fact, it is through such ‘clinical language’ that the narrator finds ‘a love-poem to Louise’ and an alternative, non-clichéd way to express their love through the language of science and empiricism (1993, 111).

In Art Objects (1995), Winterson reflects on her oeuvre to date, asking: ‘What have I said in Written on the Body? That it is possible to have done with the bricks and mortar of conventional narrative, not as monkey-business or magic, but by building a structure that is bonded by language’ (1995, 189-190). For Winterson, fiction itself – like the body and the language of love – can be dismantled and reassembled into something new and less predictable. As already noted, she has also tended to resist the categorisation of her fiction as ‘novels’. Instead, she has a different vision: ‘What I am seeking to do in my work is to make a form that answers to twenty-first-century needs’ (1995, 191). While this does not mean that we should throw away our baggy Victorian monsters, it points to Winterson’s self-conscious interest in defying genre and resisting convention, both in form and in content. To read Jeanette Winterson is to revel in the joys and possibilities of language and narrative. Whether she is experimenting with gender or genre, reading Winterson – for me, at least – is always a process of rediscovery; and hopefully her work will continue to be (re)discovered by many more readers to come.