While much was made of the 450th anniversary of William Shakespeare’s birth (in 2014), John Donne’s 450th birthday remains a little in the shadows. And yet Shakespeare’s near-contemporary is one of the major poets of the period, and one of the most prominent metaphysical poets at that.

John Donne was born on January 21, 1572, in London, son to Elizabeth and John. His family background on the father’s side was not particularly exiting: John Donne (the elder) was an ironmonger and a Roman Catholic. His mother, however, was daughter to one of the most prominent late Tudor playwrights, John Heywood, and a relative of Thomas More, infamously beheaded under Henry VIII (see Dickson 423).

Donne studied at Hart Hall (Oxford; Hertford College since 1740) but for three years only: he left at the age of sixteen and before he had to subscribe to the Queen’s supremacy and the Thirty-Nine Articles of the Church of England. From 1592 on, he studied the law at Lincoln’s Inn, with the aim to become a courtier. This is also where he meets the poets Christopher Brooke and Ben Jonson, who would later say that Donne had “written all his best pieces ere he was 25 years old” (Notes of Ben Jonson’s Conversations of Hawhornden, n.p.). This period (he stayed at Lincoln’s Inn until about 1595), is the one of his Satires and Elegies, all of which circulated among his friends in manuscript, as well as at least some of the Songs and Sonnets.

Donne’s life was marked by the religious upheavals during the period. Grown up a Catholic, he and his family suffered under the discrimination performed by the government of Elizabeth I: his brother Henry died in 1593 while imprisoned at Newgate. He was arrested after giving sanctuary to a Catholic priest. But Donne still made his way and was successful in a campaign of the Earl of Essex against Cádiz (in Spain) in 1596, which means “he was joining in an expedition against the leading Catholic power which in 1588 had launched an Armada to restore England to the Catholic fold” (Reid, n.p.). His promising career as the private secretary to Sir Thomas Egerton (the Lord Keeper of the Great Seal) was stopped short by his elopement with Egerton’s niece, Anne More. It took him more than ten years to achieve a reconciliation with his father-in-law, who then agreed to pay his daughter’s dowry (see Dickson 424) and relieved the young family (Anne Donne gave birth to twelve children) from their financial dire straits. Tragically, Anne died in 1617, at the age of thirty-three, during childbirth.

In 1615, Donne took holy orders (on January 23) and was appointed as the chaplain-in-ordinary to the king, to become reader in divinity at Lincoln’s Inn a year later, and, finally, Dean of St. Paul’s Cathedral in 1621. After various illnesses, a most severe one in 1623 which inspired him to write his Devotions upon Emergent Occasions (published a year later), he died on March 31, 1631. His poetry was published posthumously in 1633. 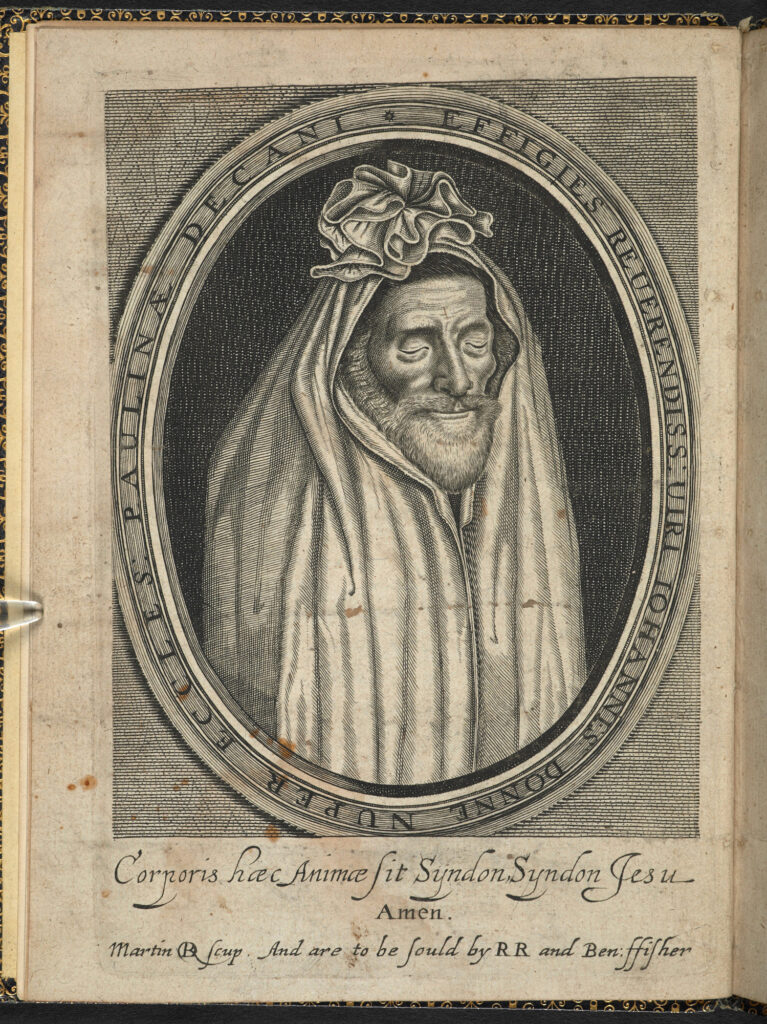 Frontispiece of “Death’s Duel”, depicting Donne in a ‘winding sheet’, a shroud for wrapping corpses prior to burial.
Source: https://www.bl.uk/collection-items/deaths-duel-by-john-donne

While this literary anniversary is meant to celebrate the 450th birthday of John Donne, I would like to conclude with his final sermon, preached by himself as a funeral sermon of some kind, before King James I on February 25, five weeks before he passed away. In this sermon, titled Deaths Duell and published in 1632 (see https://www.bl.uk/collection-items/deaths-duel-by-john-donne; see also DiPasquale), he links birth and death, and states clearly, on the basis of his belief, that the one is intricately connected to the other; this sermon “shows the living Donne awaiting his deliverance from ‘the manifold deaths of this world’ and visualizes his notion of a paradoxical interdependence of exitus and introitus, of going out and going in, which characterizes the relation of life and death” (Bauer & Zirker 17):

But then this exitus a morte, is but introitus in mortem, this issue, this deliverance from that death, the death of the wombe, is an entrance, a delivering over to another death, the manifold deaths of this world. (Donne 235)

Death is the final exitus, the introitus into eternal life (Donne 238), whereas birth means just an entry into this world that is only a temporary home. In a few years’ time, we will have the opportunity to celebrate the 400th anniversary of Donne’s death – an event appreciated by him at least as much, perhaps even more so than his birth. For the time being, however, we are happy that he was born and left us with a wealth of wonderful literary works, meditations, and sermons.