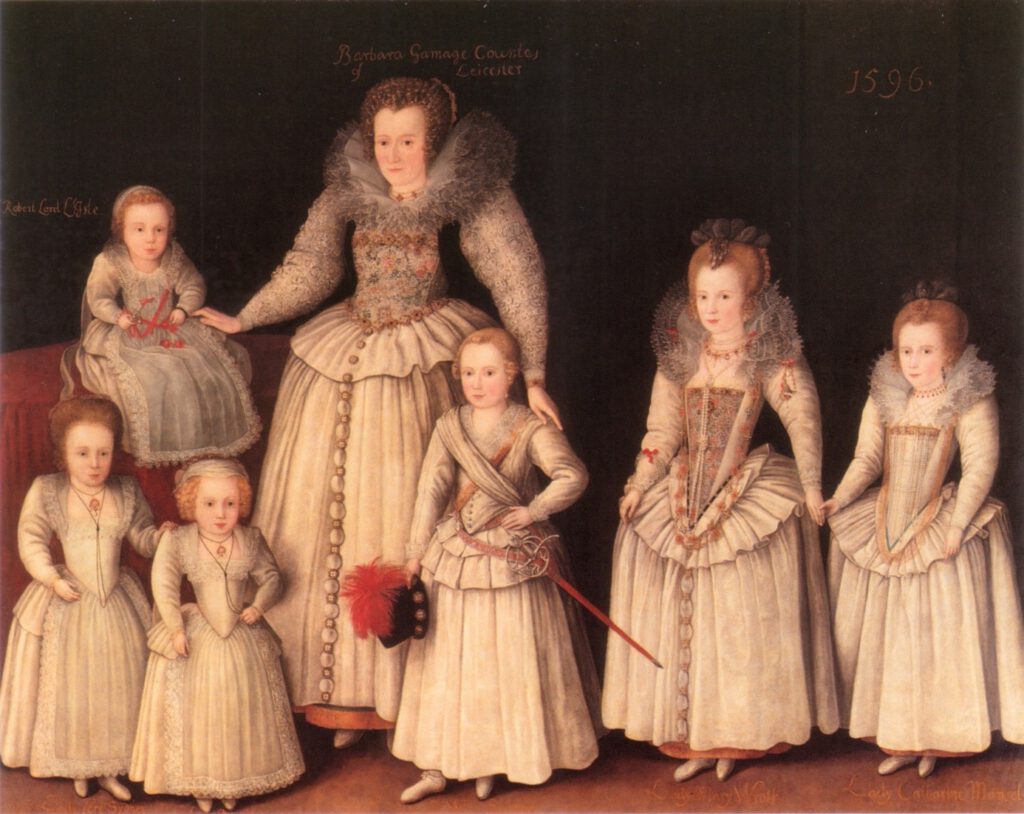 As sheep roam the early summer meadows of Tübingen, creating idyllic pastoral tableaux on the slanting green hillsides, it is not incongruous to feel reminded of the setting of early modern pastoral romances. The imagination only has to supply a prince or two, in shepherd’s robes, striding across these Arcadian fields, possibly whistling a mournful tune, for the picture to be complete. In Mary Wroth’s prose romance The Countess of Montgomery’s Urania, which sees the 400th anniversary of its publication this year, the titular character, shepherd-raised Urania, ponders her own identity in a similar setting. Ignorant of the identity of her birth parents, Urania compares her own situation unfavorably to that of an abandoned lamb (though, of course, unbeknownst to her, royal blood runs through her veins):

Poor lamb, said she, ‘what moan thou makest for loss of thy dear dam. What torments do I then suffer, which never knew my mother? Thy miss is great, yet thou, a beast, mayest be brought up and soon contented, having food, but what food can be given me, who feeds on nothing but despair? Can that sustain me? No, want of knowledge starves me, while other things are plentiful.’ (62)

While Urania laments the fact that she has never known her biological mother, her quest to find herself is equally hampered by the absence of her father and, through him, the entire patrilineal family tree. Her poetry-writing friend Pamphilia, meanwhile, must carve out her own identity in the shadow of influential relations (predominantly her father and her uncle). Urania and Pamphilia – who stand out prominently among the hundreds of characters who appear in Wroth’s sprawling romance –, thus, face different personal conundrums and, moreover, hold differing views on romantic relationships and constancy in love. Nevertheless, they share a deep and enduring friendship, generally viewed by feminist scholarship as an affirmation of female (class-based) solidarity and agency within the constraints of patriarchal society.

A Woman in Print

The notion of having to establish one’s own identity against, as much as in dialogue with, one’s prominent relations would have been as familiar to Mary Wroth herself as to her character Pamphilia (who functions as an avatar for Wroth herself). Wroth was the niece of cultural icon Philip Sidney (who had died not long before her birth) and of Mary Herbert, the Countess of Pembroke, Sidney’s sister and his some-time literary collaborator. Growing up in the shadow of Sidney, Wroth’s own literary efforts are both self-assertive and embedded in the family tradition. Wroth’s romance, the first English romance written by a woman, is influenced by her uncle’s The Countess of Pembroke’s Arcadia, but equally bears traces of Spenser’s Faerie Queene, Ariosto’s Orlando Furioso, and the chivalric romance tradition of Amadis de Gaule (cf. Lamb). In its title The Countess of Montgomery’s Urania references both the fictional character of Urania and real-life Susan Vere, the Countess of Montgomery, who was both Wroth’s neighbor and married to her (Wroth’s) cousin, Philip Herbert, the Earl of Montgomery. In this way, the title doubly testifies to Wroth’s use of the romance form “to accommodate the experience and perceptions of a Jacobean woman” (Lamb n. pag.), emphasizing both the importance of a female character within the work and of a female friend and reader without it. 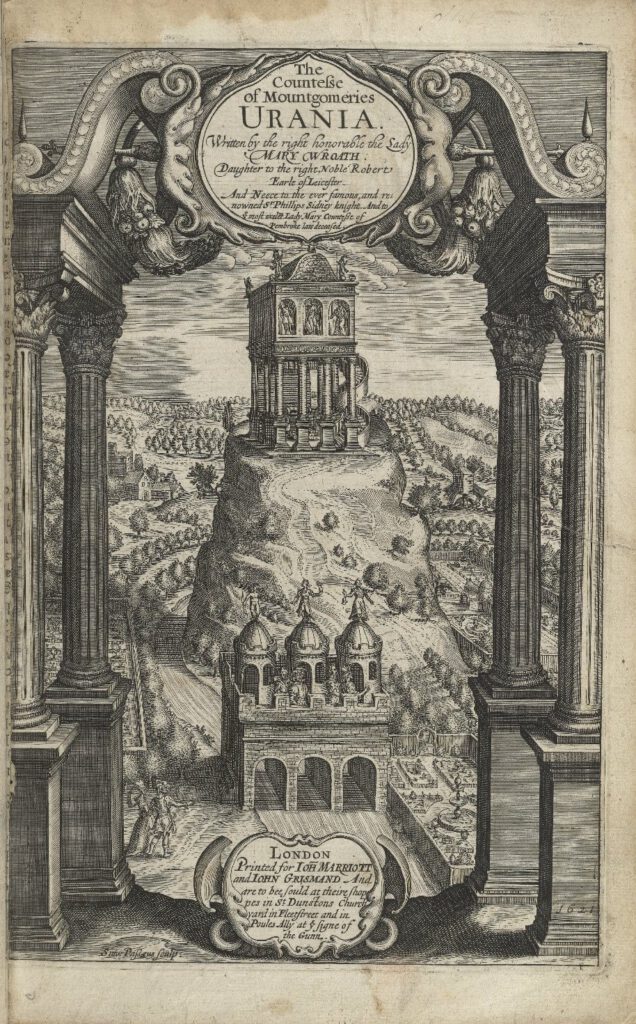 The title page of the 1621 folio edition of The Countess of Montgomery’s Urania (Wikimedia Commons). Click the image to learn more.

The 1621 folio edition of the romance was published together with Wroth’s Pamphilia to Amphilanthus, the first known female-authored English sonnet sequence, in which the romance character Pamphilia voices her love for her inconstant cousin Amphilanthus. Like Pamphilia, Mary Wroth was also enamored of her first cousin, William Herbert (Mary Sidney’s son and Philip Herbert’s brother), with whom she had two children out of wedlock (cf. Lamb). Wroth, however, not only alluded to her own life in her writing, she also peppered her Urania with satirical references – which continue to puzzle and intrigue – to members of the courtly circles in which she moved (Lamb, Topicality 236); on these grounds, various courtiers (Edward Denny being the most vociferous among them) objected strongly to the circulation of the romance and its allegedly scandalous content (cf. Miller 151).

Thus, mere months after the folio-publication of Wroth’s romance, itself highly unusual at a time when all authors, but especially women, were much more likely to be published in quarto or octavo formats, its career in print came to a premature end (cf. North 70). Copies of the first edition were withdrawn from sale and there would be no subsequent editions or reprints to rekindle interest in Wroth’s work until the late 20th century (cf. North 71). Defending herself against her accusers, Wroth claimed that she had never intended for the romance to be published at all. However, she is likely to have instigated its publication – or at least to have known of it – while simultaneously cultivating plausible deniability (cf. Lamb). A sequel to the romance, written by Wroth herself and featuring a new generation of characters, survives in one manuscript copy but was never published in the author’s lifetime, or indeed until 1999. However, after centuries of near-oblivion, this century has seen Wroth firmly reinstated in literary history. Aided by the proliferation of early modern gender studies since the 1980s, Wroth’s (Sidneyan) star has risen dramatically. After nearly 300 years as ‘a woman out of print’, Wroth is now very much back in print (not to mention in vogue). Entire scholarly monographs – like Naomi Miller’s Changing the Subject: Mary Wroth and Figurations of Gender in Early Modern England (Kentucky UP, 2015) – have been dedicated to her and she is virtually assured treatment in every monograph or anthology concerned with early modern women’s writing (cf. Salzman or Phillippy). Not unlike her romance heroes, who ‘write their fame eternally to times’ (cf. Wroth 175), Wroth has secured a place for herself in the expanded canon of English Renaissance writers that she is unlikely to lose again.